March 19, 2019
We drove up to Seattle, because there are no direct flights from Portland to Fort Lauderdale, but there are from Seattle to FLL. Here's the tricky bit: the nonstop Alaska flight from SEA to FLL is a redeye. It arrives at 6AM local time in Florida. Programming note: this was not a great idea. 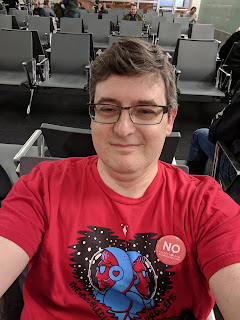 I'm just too old to do redeyes; I can't sleep and I can't go without sleep and this makes me very, very cranky. Our next trip out to Fort Lauderdale will have to be done differently, for sure. The flight had several mechanical difficulties which resulted in us not taking off for more than two hours, including 90 minutes sitting on the tarmac at the gate while they double-checked everything to make sure things weren't going to break. That was actually fine with me; the longer we waited to take off, the later we landed. (I have a whole bit in my talk about Support about five nines and moving parts and the 737 so I'll spare you the repeat and let you watch it yourself here.) My guess is at least half the people on the plan were SeaMonkeys and it was nice that the Alaska crew were willing to put up with quite a bit of antics. And once we were in the air, everyone calmed down and most folks at least pretended to be asleep.

So we did in fact land in Fort Lauderdale the morning of Friday the 8th, eventually. We caught a taxi to our hotel, checked in early, and then IMMEDIATELY went to sleep for several hours. When we woke up, we were feeling much better, and so we ran some errands and grabbed some food. 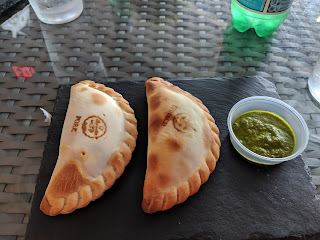 Then we got affogato before heading back to the hotel and taking another nap, I think? I dunno, Friday was a bit of a blur; sleep deprivation fucks me up these days. Anyway, later we got food at the hotel bar and it turns out our hotel was were all of the JoCo folk were staying, because I kept almost running into performers and famous people. I made eye contact with John Roderick and he totally caught me looking, but I didn't bother him. I spent most of my cruise, in fact, making sure I wasn't bothering people, because while it was my vacation, they were all working, so I wanted to give them as much space to get stuff done as I could. I dunno, maybe this means I missed chances to meet famous people. But I think I'm OK with that. My Starfucker Quotient is extremely high, so reeling that back was the choice for me. I did, eventually, get some interactions with some of the folk on the boat, but I'll get to that eventually.

Anyway, we went to bed early, because we were fucking tired.

It turns out that trying to kill a specific amount of time is surprisingly hard in a strange city without a car. We weren't scheduled to board until 1PM, so we were at odds and ends for a while. We checked out and stashed our bags at the hotel, and then walked over to grab one last lunch before boarding. And then we met a very nice pair of SeaMonkeys who were willing to share a ride to the boat, and our driver was extremely nice and very knowledgeable about where we needed to go and how to get there. And then as soon as we got in line, we ran into our friends Rachel and Jon, which was great! And then we got on the boat, and the cruise started for real. 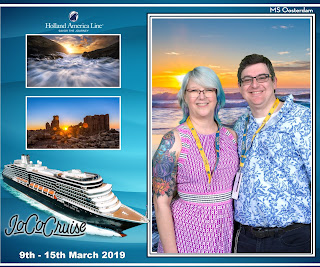 We signed up for Gold Team, which is an early show and a late dinner. Jean and I were big fans of this, because it meant we weren't likely to talk ourselves into skipping the show and it meant we could dine at our leisure. And the first show of the first day is always a bit of an adventure, and that was no different this time. Sound troubles meant that the performers, including Jonathan Coulton, Jim Boggia, Aimee Mann, and John Roderick were all pretty loose and joke-y for it. It was not a huge surprise that the show ran a little long, and it was fun to watch them roll with the various issues. It turned out this was going to be a theme for the whole cruise, but we'll get to that later.

Rachel, Jon, Jean and I made the decision to get a table together so we were four seats at an 8-top, which gave us the opportunity to invite others to sit with us so we could meet new people. We just didn't realize that we would need to be explicit about inviting others because the dining team were very insistent about the "reserved seating" thing. Which is fine, that was their job! It just took us a little time to get everything figured out.

And then we really got moved into our cabin, and y'all. The veranda. The last time we did JoCo, we did an interior cabin and it was... fine. Not fantastic, but it was OK. This year we decided to splurge on the exterior veranda room and it was SO WORTH IT, right from the start. We spent more than a little bit of time just sitting on the porch, watching the ocean scroll by, and especially in the evening we sat out and looked at the stars and Jean practiced her ukelele and it was so, so nice. We'll never go back to a porch-less cruise experience.

The first stop of the trip was Half Moon Cay (which turns out is pronounced "key"!), which is a private island owned entirely by Holland America. Many, many people really enjoyed the beach and everything, but I'm not really a beach-and-sunshine kind of person, so I ended up just staying on the boat and relaxing, including attacking the taco bar. I spent a bunch of time reading on the porch, and wandering the boat just relaxing. It was really a great way to spend a day's vacation. I was going to do a day-by-day review of the cruise, but I just realized I don't think I can manage to separate out all of the events that way, because that's not the way I  remember the cruise. I remember dinner with Fitz, and how much fun it was to talk with new people. I remember almost doing the D&D game, but not feeling well, so heading for bed instead (and not being sad about the extra sleep). I remember the guilt and pain about the colonialism on display on Tortola, and how warm the (unexpected) rain was on San Juan, and how amazing the They Might Be Giants show was despite being hastily thrown together and time-limited. 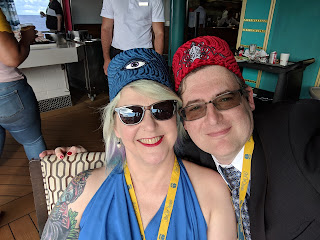 I remember hanging out and playing games with Jean. And with Rachel and Jon. And a korean-themed lunch with some great and interesting folks. I remember the amazing darkness and the beautiful stars in the sky. And there was always the moon. 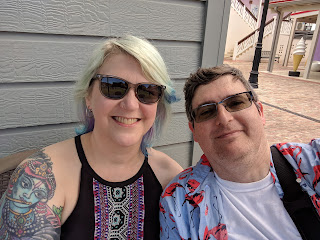 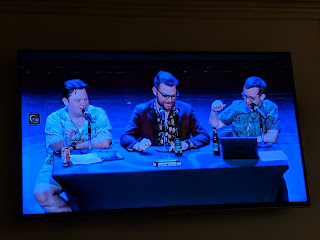 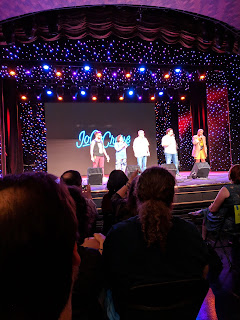 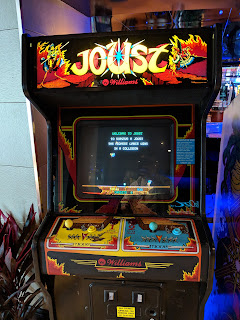 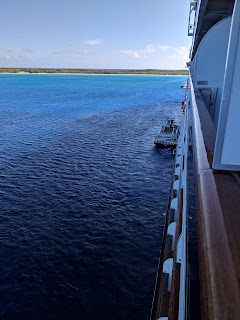 The thing I remember the most is how amazing everyone was. How even when we were drenched and the headline concert had been cancelled and two thousand people were trying to get back on the boat all at once, we were all just... happy to be together. We weren't even sad! We did sing-alongs while we stood in line waiting to get through security, and then John Flansbergh of They Might Be Giants stepped up behind me and Jean and said "Eleven PM, main stage, don't tell anyone" and then we made it up the gangplank and we were on the boat and there was Jonathan Coulton himself talking to a group of staff and I heard him ask if anyone even knew were "Flans" was, and I said "He's right behind us, he'll be here in ten seconds" and Jonathan was like "Great! Awesome, thanks!" and then there was an announcement that they had thrown together a show and everyone cheered and TMBG did a 90-minute show in 38 minutes: no banter, no small talk, just songs - bam bam bam, like a kick drum keeping time - and it was GLORIOUS.

And then we spent the next two days at sea, recovering. And Merrill Garbus sang Aretha Franklin and Jim Boggia played "Over the Rainbow" on his ukelele that he named "John Hodgman" and we all sang Sloop John B together and cried, and then the next morning we all got off the boat and promised to see each other again next year, same JoCo time, same JoCo channel. 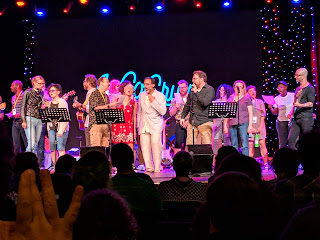 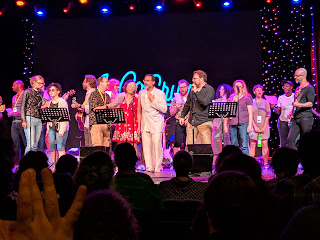 It was special, in that way that Summer Camp or Summer Stock or a Community Theatre show is special, and I didn't think I would miss it as much as I do, but I do miss it. And I'm glad I got to go, and I'm glad we're going again in 2020.

Thank you to everyone, including all the performers, staff, and crew that made 2019 so amazing.

June 21, 2019
The most amazing thing to me, in a book filled with amazing things, is that McGuire never addresses the title choice of the book, and yet it was perfectly, brilliantly obvious from about a third of the way in. No, I won't spoil it; I'm not an asshole. But it is amazing, and exactly appropriate for the story being told. There are a LOT of things being juggled in this book. Pairs of characters. Solo characters. Histories. Magic. The modern world. Alchemy. The hidden corners everywhere in the world, and some of the people who live there. And the places that exist in the social unconscious, that are there but not there any longer.

It's hard to talk about this book without spoiling it, because many of the choices the author makes are so outside the norm of the genre that to give them away is to take away from the ingeniousness of the move itself. But in the same way, I've also read several books that leverage exactly the same tropes and choices in similar ways, to great and…
Post a Comment
Read more

March 22, 2019
It entirely escaped my memory that, while on my cruise, I finished Elizabeth Bear's new novel, Ancestral Night, and hadn't managed to review it yet, because I spent so much time gushing about it while on the boat. Like, honestly, for a couple of days it was my opening conversational gambit: "Hi! Have you read Ancestral Night? Yes? Let's talk about it! No? You should read it right now!"

So yes, this is going to be a positive review, in case you hadn't guessed.

As a fan of Star Trek and Ian Banks' Culture novels, I can absolutely see the underpinnings of the Synarche (and the dark mirror of the Freeporters) present in this novel, which I desperately hope is about to become a series. The main characters in the story are two humans, two cats, a giant preying mantis, and an AI and all of them have hidden fracture-points and surprising secrets that are hidden, sometimes even from the person who's hiding them. And like the best parts of ST and Culture storie…
Post a Comment
Read more